I’m amazed it’s taken me so long to do a write up on the cinematic mastery that is Kubrick. 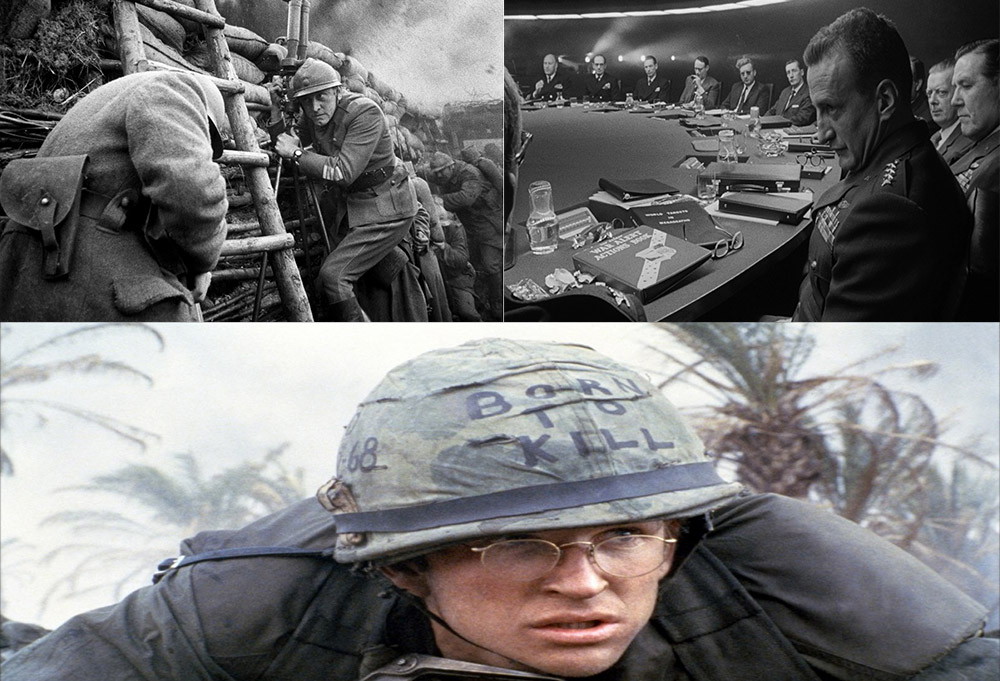 Of the many unconventional movie trilogies out there is one that is the least talked about and recognized in film circles in my opinion, that being Stanley Kubrick’s War trilogy; comprising of Paths of Glory, Dr. Strangelove, and Full Metal Jacket. Although not officially a series of films together, there are common elements and themes linking them together as each depicts different kinds of warfare in three wars and the adverse effects thereof on their respective time-periods. Each one increasing with its inhumanity and madness. One of the man’s first Masterpieces Paths of Glory is about the hypocrisy and corruptness of high-ranking leaders in combat, the seminal Dr. Strangelove continues with this idea of unethical or unprepared leadership albeit with a much more comical tone, while Full Metal Jacket depicts the erosion of sanity and conscience under the duress of basic training and fighting beginning with the social conditioning by R. Lee Ermey’s Sergeant.

Kubrick is my favorite filmmaker of all-time, as one can tell from the page borders of this site, one of the reasons is the many different genres he played around with; sci-fi, historical drama and epic, erotic thriller, horror, satire, that would come to define those respective genres. The Shining is quintessential horror, Eyes Wide Shut the psycho-sexual thriller, Spartacus the “swords and sandals” epic and of course 2001: A Space Odyssey goes without saying. He rarely stayed with one type of movie from one to the next, so it is telling that three of his most recognizable are war movies. In the Director’s lifetime there were three major conflicts that his homeland of the United States was deeply involved in: WWII, Vietnam and the Cold War. Indeed, the man spent most of his adult life scared that the human race would be annihilated in a blinding flash of light. Like many great artists he sought to try and understand that which frightened him the most about the human condition. 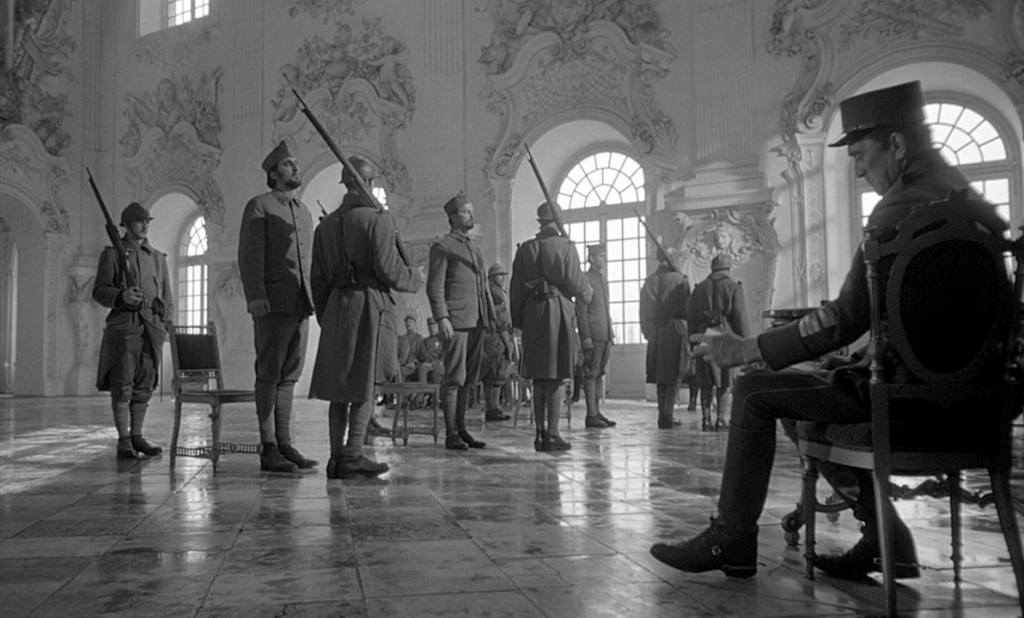 Paths of Glory opens in French Western Front of WWI, a battle of attrition and futility with soldiers on both sides slaughtered in mass for mere meters of territory. The trench warfare is depicted harshly and horrifically as Colonel Dax (Kirk Douglas) leads his men on a dangerous offensive push on orders from detached and cold superior officers Generals Mireau and Broulard. Kubrick was always keen to point out the failings of leadership in institutions and here it is with the high command officers more concerned about the perception of winning the war with “glorious” engagements than the lives of the men they send on those meaningless raids. After a disastrous battle, the generals want to deflect blame from themselves by ordering three soldiers under Dax’s command to be executed for “cowardice,” the at-odds leader can do little but plead for the lives of his men. In the end there is no 11th hour rescue as the men are shot by firing squad, all the beleaguered Col. can do is allow the rest of his squad a moment of reprieve by listening to a German girl, the Actress Kubrick would marry in real-life, sing Der Treue Husar (The Faithful Hussar). His men all know the tune, but none of the German words, a touching moment of connection between two peoples at war with each other. There is still a glimmer of hope with the sounds of humming soldiers.

What else can possibly be said about Dr. Strangelove? It is one of the most pointed and daring political satires ever made; the cold war rendered to a sadistic game of poker, where the stakes happen to be the continuation of the human race. Arguably the most well-known among Kubrick’s works, again continuing the director’s common themes of depicting the faults of powerful institutions and its hierarchies by showing how inept the Western and Eastern leaders are at handling a crisis of severe magnitude and unbelievable consequence. Adapted from the serious Novel Red Alert, Kubrick and his writing team of Terry Southern and Peter George decided to take the material another way. Sidney Lument would take the source material faithfully with Fail Safe the same year, turning out to be more of-the-moment alarmist than memorable in the subsequent years. Dr. Strangelove on the other hand is oddly comforting in its ridiculousness, but searing in its message. The movie is timeless for its characters, quotes and ending. The gold standard for dark humor, in presenting a horrifying and real-life concept but with a frankness that allows for the ideas to hit home more effectively. We are given a humorous look at 60’s West Vs. East politics run amuck, but with a pessimistic overtone about the real threat of Nuclear annihilation. 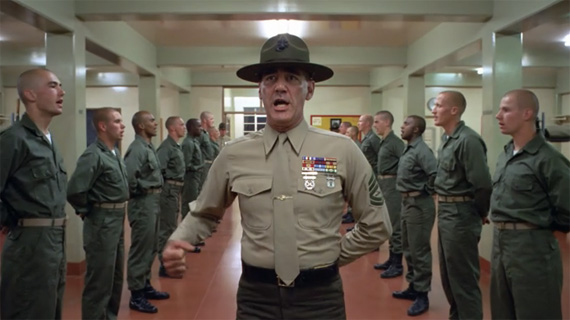 Full Metal Jacket  stands completely on its own as stirring depiction of the Vietnam War and Basic Training that serves as the prolog. With an unforgettable turn by R. Lee Ermey as the Drill Sergeant Hartman willing to do all that is in his power to break the new recruits down to simple mindless killing machines. Vincent D’Onofrio as Private Pyle is the center of the instructor’s rage and constant verbal assaults. Driving the poor guy to insanity as he shoots his tormentor and takes his own life before being shipped out. The first half of the movie is usually what audiences remember the most, but it is the second half actually taking place in Vietnam that Kubrick’s message becomes abundantly clear. Private James T. “Joker” Davis (Matthew Modine) is the audience surrogate, observing the military clusterfuck and glibly making fun of the deteriorating tactical situation as part of the Army Press Corp. He and his squad get entrenched in a battle-scarred city as the night falls trying to take out a merciless sniper. In the end the hellish landscape and chaos absorbs Joker and his fellow soldiers to where they are all in unison singing “Mickey Mouse”, (A slang term for an organization made up of unprofessional and self-destructive members, also echoing the ending to Paths of Glory; now the soldiers know all the words) the pure insanity of combat takes hold and the individual is gone, lost in the fray.

Ingmar Bergman called his Faith Trilogy, comprising of Through A Glass Darkly, Winter Light and The Silence, a series of “Reduction”. In that each film is a reduction in the presence of God or a higher power at work on the characters, the progression shows the increasing coldness and detachment of people. Kubrick has a similar mechanism in these films; Paths Of Glory presents the absolute hypocrisy of War but still has glimmer’s of hope in the basic humanity of the soldiers, Dr. Strangelove portrays the hilarity of the ineptness of world leaders in crisis but is also about the dangerous irony of Mutual Assured Destruction, Full Metal Jacket is the ultimate detachment of any sort of levity in times of war; the destruction of the individual and humanity to serve a horrific cause. The three very different conflicts put through the same critical and unflinching scrutiny; times and people change, war doesn’t. Whenever a new conflict is just on the horizon these themes and situations are sure to follow right along side. 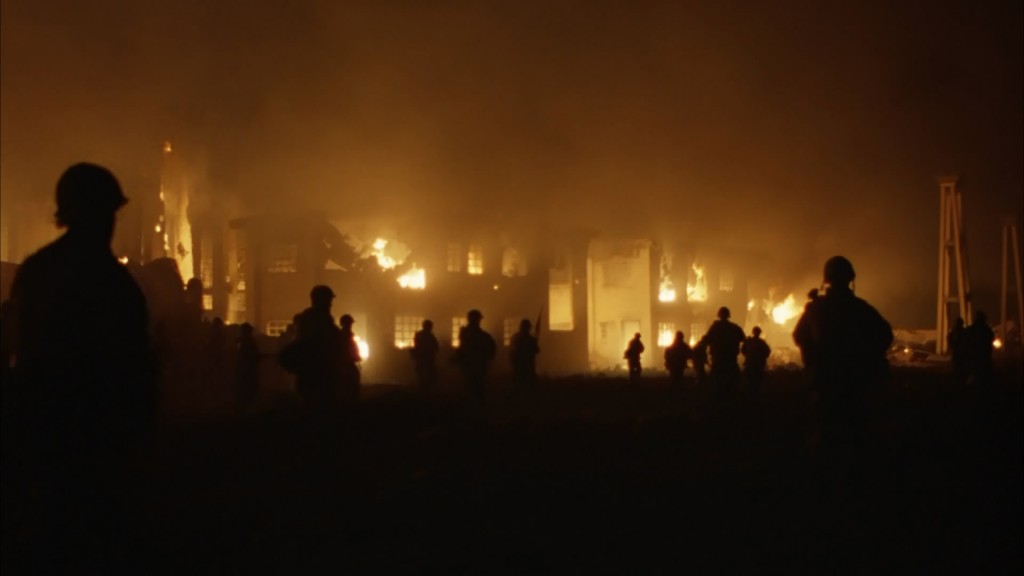