Film evokes many different types and range of emotions for me, for the first time in long time it conjures up one that I don’t particularly like feeling… 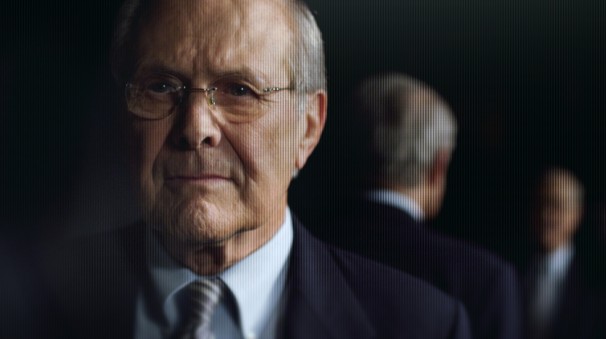 The great documentarian filmmaker Errol Morris, as he did with another notorious Defense Secretary Robert McNamara in the excellent and eye-opening Fog of War, again paints an unsettling portrait on the weight of power and leadership. Not so much a “conscience of the king” effort like with McNamara baring his soul to the camera, more of an autopsy of systemic failure built on dubious logic; hence the title lifted from the man’s own words. As he has done with many other subjects Morris interviews, or some might say interrogates, with his methods using his custom equipment and with a clear agenda. With McNamara he endeavored to find the kindred spirit and a guilty conscience laying just beneath the surface of a massive intellectual ego, with Rumsfeld he discovered…something different.

The filmmaker has said time and again in interviews and articles about the film that he quite thoroughly meet his match with the smiling Iraq War architect. He ran into a proverbial brick wall of dead end epiphanies, and false revelations while questioning the man about his career. Through the inauspicious beginning of his career in the Nixon administration to his final days defending the use of “enhanced Interrogation” techniques the man keeps on putting on that benign smiling face. There is very little in terms of breakthroughs into the man’s psyche, an offering of emotional cadence or a glimmer of sympathy. So what exactly is there to take away from all this? 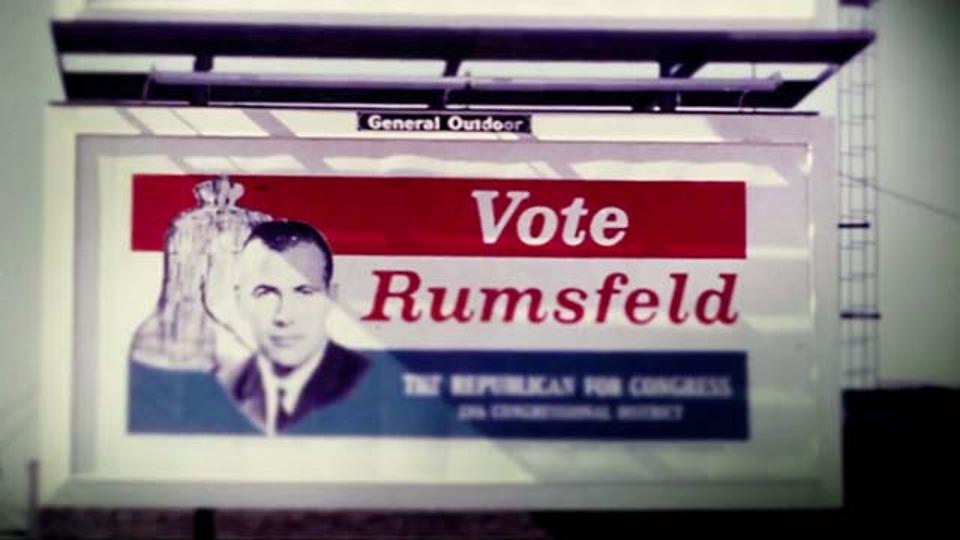 Actually plenty, for one the film shows that there is no hint of a deluded nature in the mannerisms and words; he truly honestly believes that he is not at fault for any of the maddening chaos caused by the two wars he oversaw. That he did the absolute best he could with the intelligence he had, the ends justify the means in the claims of torture (water-boarding) of suspected terrorists, and no one else can truly understand the burden he had to endure during his time in office.The emperor has no cloths to be sure, but he is oblivious to the breeze. For another Morris gives an engaging profile of the rise of influence in Washington; the power plays, the friendships, the back stabbing and the ego it takes to make a name for yourself. A real-life House of Cards is laid out for the audience, though with less sympathetic characters.

Throughout the years after being fired by President Bush in 2006, Rumsfeld has been ostracized; a persona non grata in very nearly all political circles. His political capital pretty much spent and removed. It hasn’t just been Morris that the man has stumped, everyone that has tried to interview him in order to evoke some kind of realization for the man has met with the same wall. He’s in is own world, free of the guilt, remorse and reflection that clearly plagued Robert McNamara. The comparisons to Fog of War are not unwarranted, the director himself has said he wanted this to be a series chronicling walking the corridors of power. The film does suffer greatly of having a far less interesting center; however, the trademark Morris touches do their best to move the film forward.

Unlike most who will seek this out in order for some sort of vindication for their rage and malice, I feel none of that towards the man. I don’t hate him, I pity him. I don’t like the feeling, I don’t think anyone really likes having it. You feel regret and disappointment; but don’t have the drive to do anything real about it, you can only shake your head. The world he chooses to live in now is very removed from a healthy reality and any debate with him would be fruitless. No matter how strong your political leanings sometimes you just have to move on, Rumsfeld clearly has. 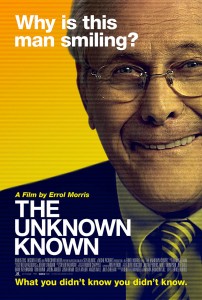 7.8/10 (Equal Parts Humorous and Scathing; Though Filmmaker May Not Have Succeeded Completely, It Still Readily Portrays A Life In Infamy)