This one has only nine entries, given how powerful each of these are I figured nine were enough. Just so you don’t think I was short-changing you…

Ingmar Bergman appears again with another one of his masterful works in 1957. This time a medieval allegory on man’s mortality and very existence, ‘The Seventh Seal’. Frequent Bergman cast member Max Von Sydow, (he even had a small part in ‘Wild Strawberries’) plays a crusading knight returning home with his squire only to be stopped in his tracks by Death, literally. The knight very much wanting to continue living offers to play Death in a winner-take-all chess game. He continues to wander medieval countryside trying to stay one step ahead of the Spector of Demise. Probably the most well-known in Bergman’s extensive filmography because of the sheer absurdity of literally trying to outplay Death while playing a game of chess. The usual Bergman tropes are all her, ominous tones, thought-provoking imagery and surreal elements. In my opinion, this is the best introduction to the oeuvre and artistry of Bergman, with scenes and imagery that are now iconic to cinema. As with ‘Wild Strawberries’ Bergman had proven again that his best was yet to come in the following decades.

Yes, The Duke finally makes his appearance I wouldn’t release this list about the 50’s without a John Wayne performance. John Ford’s 1956 ‘The Searchers’ is an outright western classic, and just classic period. Working for the 12th time together Ford and Wayne made their Magnum Opus together centered on bringing a kidnapped girl back to her family from raiding indians. Ethan Edwards is not the typical western hero, full of resentment, and blind rage towards Native Americans. When his niece is taken by a band of marauding indians, he and Martin Pawley (who happens to be of indian descent) set out for blood and to get her back. As Martin rides with Ethan, he starts to wonder if Ethan’s racism will cloud his judgement when/if they ever find the girl, because of her immersion into the hated culture for a long period of time. Showcasing male bravado at it’s roughest and blemished, the film is widely consider the ultimate western tale. With Wayne giving his best performance for his favorite director.

Groundbreaking, game-changing, and inspiring, Sidney Poitier made his debut in 1950 with ‘No Way Out’. He started to gain critical appeal though his many roles in social dramas including ‘Blackboard Jungle’ and ‘Edge of the City.’ By the end of the decade he became the first black actor to be nominated for an Oscar in a leading role in ‘The Defiant Ones’ playing an escaped convict chained to fellow escapee Tony Curtis, becoming the only prominent African American Actor actively working in film. Though he wouldn’t truly breakthrough until the 60’s, his work in this decade laid the foundation for his ground-breaking acting career in the near future. The Jackie Robinson of film got his start right choosing important roles that would eventually lead to Oscar Gold and social-changing stardom.

16). The Dialog In ‘The Sweet Smell Of Success’

Before ‘Mad Men’, Before ‘Network’ there was 1957’s ‘The Sweet Smell of Success’ displaying the sleazy, under-handed, shadowy nature of the media at large. Burt Lanchaster gives a career defining performance as the tenacious, devious and corrupt J.J Hunsecker a powerful broadway columnist whose influence is far-retching and suffocating. A slimy but brillant Tony Curtis plays Sidney Flaco, a small time press agent trying to make a meal out of the scraps that he finds about town to feed to big-time columnists like Hunsecker. The exchanges all the characters have look ridiculous on paper, with lines like “Sidney, this syrup you’re giving out with… you pour over waffles, not J.J. Hunsecker.” and “I am tasting my favorite new perfume – success!” but recited by the likes of Lanchaster and Curtis, it sings. Creating an atmosphere, along with the cigarette smoke and suits, of an era where these sayings were not out of place in the media world. Beautifully shot by James Wong Howe, the film lifted the veil of print news reporting in the 50’s, leaving the audience wanting to wash their hands afterwards.

10 years after the last concentration camps were liberated in Europe, French filmmaker Alain Resnais put together 32 Minutes in effort to make sure they would be the last concentration camps, ever. ‘Night and Fog’ was one of cinema’s first attempts at chronicling one of the darkest chapters in modern history. Juxtaposing what the camps looked like ten years later, to what they looked like when they were in use by way of archival footage, Resnais begs the ultimate questions of why? How? and who is responsible? His cuts to historical archival footage are bleak, unflinching and no less shocking today. Audiences must leave afterwards with the knowledge that yes, this did happen and we can never allow it to happen again. Resnais also made 1959’s ‘Hiroshima Mon Amor’, which started out as a documentary similar to ‘Night and Fog’ about the aftermath of the nuclear blast there. He instead made a fictionalized account based on the event, perhaps he had had enough of human atrocity for one life-time.

Alright, let’s lighten up the and laugh a little with 1952’s ‘Singin’ in Rain’. Has there ever been a more breezy, happy and fun musical? Centered about the shift to talking pictures in late 20’s hollywood, Gene Kelly, Debbie Reynolds and Donald O’Connor form a trio trying and get their studio their first talkie musical hit. Renowned for popularizing now classical tunes, like ‘Make ’em laugh’, ‘Good Morning’ and of course the title song. One of the most beloved films produced in the decade, most of the scenes are etched into the public conscience including Gene Kelly’s rendition of Singin’ in the Rain while in the rain. Countless parodies and homages in the years after help to cement this as a classic must-see. Helping to convey the general optimism and good vibes felt through the highs of the decade that produced it.

Highly influential French director Francois Truffaut first feature movie ‘The 400 Blows’ is a reflection of his own turbulent and harsh childhood. Examining the lengths a free spirit will go to be feel free in a world full of rules and expectations. Antoine Doinel, a superb Jean-Pierre Leaud, is that free spirit trying to find his way in life.With his parents near constant bickering, and his teachers cold as ice he finds solace with a friend, Rene, who shares in mischievous behavior about Paris. Being one of the first French New Wave the film is one of the most iconic in the movement. Portraying the faults of the French educational system and Juvenile detention program, the film established France’s status as one of the premiere nations for cinema as high-art for decades after. 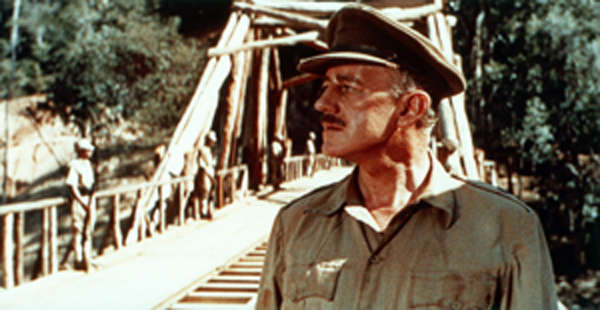 Indeed, David Lean’s epic ‘The Bridge on the River Kwai’ is exactly about that. Alec Guinness portrays Colonel Nicholson a South Pacific POW who becomes obsessed with the building of his captors train bridge across the Kwai River in Thailand. One of the most indelible anti-war movies to come out of the 50’s. The desperation of man’s nature when pushed to the brink is on full display, also defining the failings of military hierarchy on a grand scale. Much like ‘From Here to Eternity’ in it’s deconstruction of the men who fought in WWII, finding the reality of war and the people who fight them. The film is also notable for having two blacklisted screenwriters, Carl Foreman and Michael Wilson, who had to remain uncredited as the movie was awarded the oscar for best writing. It wasn’t until 1984, that the academy retroactively awarded the two due recognition for their work. Unfortunately the decision came too late for Wilson, who died not knowing, and Foreman passed away a day after the announcement.

’12 Angry Men’, the late great Sidney Lumet’s first feature in 1957, is one of the very best film debuts in history, and  it’s one I don’t believed he ever topped. The story takes us into a jury’s deliberation of a young kid’s future, which is decided by 12 adult men. 11 of them believe that it is an open and shut case, the kid is a cold-blooded murderer. Henry Fonda’s Juror 8 is the one person standing up for the ‘presumed innocent’.  All he wants to do is give the accused a fair shot, as his life is on the line. Remarkable for it’s analysis of group dynamics and the nature of leadership, it also captures how the power of suggestion sometimes wins arguments. No matter the vigor nor force of will of the other men in the room, Juror 8 made sure that a fair verdict was dealt that day. The director made the one room drama work building tension by gradually making the room physically smaller as time went by. Henry Fonda personifies the notion “Let justice be done, or the Heavens fall!” Lumet’s gritty realism and tension building in ’12 Angry Men’ was a sign that a new unique cinematic voice would be heard for decades to come.

Hey you all made this far, why not wait and see the Top Ten? I’m not even giving you a hint of what is to come, that’s how confident I am in this last installment. You’ll see for yourself.