In a vast seemingly endless barrage of broken bones, slices, dices, knives, hammers and baseball bats there in lies a method to the blood-soaked madness.

Two years ago writer/director Gareth Evans released the Indonesian sleeper hit The Raid: Redemption an energetic violent old-school martial arts extravaganza recalling fighting movies of the 80’s and 90’s with stars like Jackie Chan and Jet Li headlining the casts. In his followup Berandal he does what any good action sequel should do: change the game for the heros. Doing it in serous style amping up the fights ensuing violence to 11. It is refreshing to see a project made with purpose, pose and style; as nearly every time a surprise hit tries to recapture the magic again in a sequel the results are poorly conceived and flatly executed.

It has been well-documented that this sequel was actually the movie that Evans wanted to make in the first place, Redemption was the project to help get the funding he needed to expand his vision. And it shows, as this is much more of a character-driven crime thriller than a simple marital arts film. Berandal brings many new faces, factions and buckets of blood into the fold. Taking place pretty much where the first movie left off, just after officer Yama left the apartment building and his brother behind. He is asked to go undercover in prison to befriend the son of the Jakarta’s biggest crime lord and report on the mob’s dealings and operations. However, as this things typically tend to do, things never go according to plan. 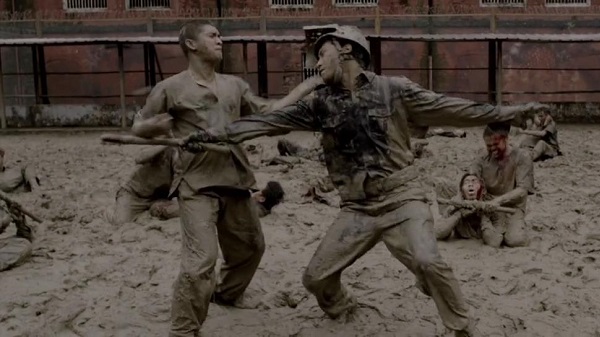 All that seems as a run-of-the-mill synopsis for an ordinary cop thriller, but rest assured this Indonesian import has it’s own take on the old cops vs. crooks genre. As Yama goes deeper and deeper into the city’s underworld the cycles of violence grow as the different crime syndicates battle for control. Once again the fight scenes are of the highest caliber and precision; well shot and framed with very little of today’s shaky cam, quick editing and camera movements action aesthetics to lessen the experience. Jaw-droppping fight stunts and choreography are again filmed with attention to creating tension and thrills. Those scenes are varied and diverse and differ from what was seen in the first movie offering a new styles of fighting in nearly every scene.

Where Redemption focused on close-quarter combat within hallways and small living rooms, the first fight scene in the sequel has our hero out in the middle of a muddy prison yard taking on hoards of inmates alone. Showing us right off-the-bat that this movie will certainly give you what you came for, it’s only the rules that have changed for the better. Though the story is nothing we haven’t seen before in several other of these kind of genre movies, Evans is not seeking to create a game changing action movie he is seeking to perfect it. The series representing two of the finest action films since their heyday in the 80’s and 90’s.

The easiest way to describe the differences between the two movies are that the best way to see Redemption  is with english dubbing on as a throw back to martial arts fighting movies of yesteryear; the best way to watch Berandal is with subtitles and the original Indonesian language spoken, as it is truly a foreign film character-driven action piece. Which you’ll be hard-pressed to find in western action films.