It is an interesting coincidence that I referenced the Manhattan Project earlier this year in my The Wind Rises review  and especially highlighted the quote: “I have become death; destroyer of worlds.” Because for the characters on the new outstanding WGN historical dramatic series J.R Oppenheimer’s eventual quote at the moment does not refer to what they are building, but what they are all doing in order to bring it to horrifying fruition. 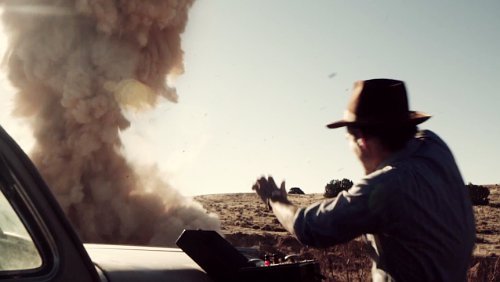 It is summer 1943, Los Alamos, New Mexico and the world is at war; the forces of Nazi Germany and Imperial Japan have dug into their respective theaters of war against The United States and its Allies, there is no question this is going to be a long conflict across two oceans and continents and there will be deaths on an unimaginable scale. Unless a highly top-secret unit of scientists, engineers and mathematicians, dubbed the Manhattan Project, can come together to harness the untapped power of the atom. Backed by the military this team must remain in a closed system, nothing can get out. Secrets keep us ahead of our numerous enemies on a global scale, but secrets tear the project’s members families apart on a domestic level. A large negative correlation that only grows as the project moves closer to fearful completion.

We first are introduced to Dr. Frank Winter, dedicated and fiercely played by John Benjamin Hickey, on the cusp of an epiphany that will send him on a path to single-minded obsession and determination to end WWII. He leads a team made up of outcasts, independent thinkers and trail-blazers in the field of particle physics. All itching to make their marks on the project and their coworkers. When Frank comes to them one-day with a radical game-changing idea for the detonation method for the ‘gadget’, using implosion to force radioactive cores to collide together, thereby initiating a chain-reaction. It goes against the prevailing detonation plan for the bomb, code named thin-man, where most of the projects resources, including the rare and hard-to-produce plutonium needed for chain-reaction, go to. The determined and outspoken scientist, along with his team, become something of a nuisance on ‘The Hill’ for not sticking with the rest of the more prominent and influential project member’s plans.

Additionally he also occasionally butts heads with the Army brass that controls nearly every facet of life on ‘The Hill’ headed by Colonel Alden Fox, an always great Mark Moses a Mad Men Alum, but lurking in the shadows is someone far worse. A government agent named ‘Occam’, a menacing and calculating Richard Schiff, makes sure to keep tabs on any and all the information coming in and going out of the buildings to a big-brother-esque degree. He and his staff are all about nothing getting out, and compartmentalization; nobody knowing more than they need to know for their assigned task. However, science has only ever really succeeded with collaboration and shared knowledge. The scientists and military have an allegiance guided by expedience, one that is always ready to break apart violently. 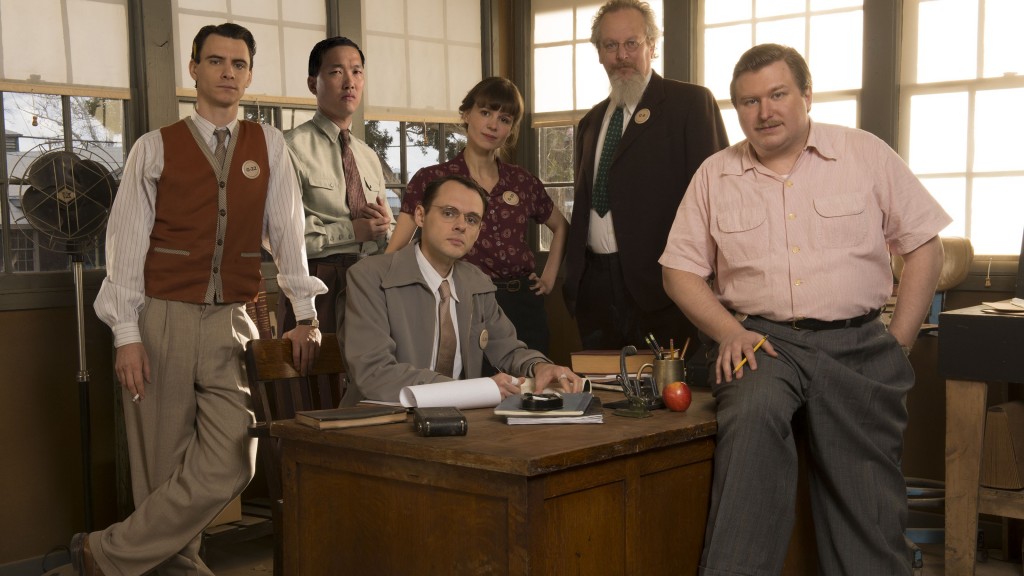 Bringing us to Charlie Issacs, an outstanding Ashely Zukerman, a wunder-kin in the fields of physics and mathematics. Taking his wife Abby, House of Cards Rachel Brosnahan, and young son along to Los Alamos. Under the guise of Thin-Man’s group leader Dr. Reed Ackley, A cunningly great David Harbour, Issacs sets about to single-handily expedite the calculations and theory behind the goal on ‘The Hill’. With that kind of weight on his shoulders there also comes secrets that he must hide from the people closest to him. Abby (Brosnahan continues to perfectly portray more-complicated-than-what-you-think-at-first characters) is at first naive to the whole proceedings, but she can only question and be curious as to what is taking up all of her husband’s and the other’s time and efforts. It is that feeling of coming in second in one’s own marriage that starts to lead to serious concern to both Abby and the other wives.

Mrs. Winter being chief amongst those more concerned significant-others. Olivia Williams has never failed to render an emotionally interesting character and as Liza she is in true form acting as the ever present voice of reason and reality in Frank’s life as his obsession over his idea grows to alarming levels. Depriving himself of sleep, showering and peace of mind in order to finish his design. Although minuscule in relation to ending the bloodiest conflict in human history, that is another thing on the line; ego. A dangerous thing in advancing any kind of science, conflicting intellectual egos especially on a stage with this much on the line.

In the past couple years with the release of several engaging science-fiction films, i.e Upstream Color, Under the Skin, Cloud Atlas, this T.V series takes a different path in rooting itself in science-fact, instead. Show creator Sam Shaw has obviously done research into nuclear physics and mechanics as this is one of the most authentic portrayals to the actual science one will ever see done for dramatic rendering, as my Father and I can attest to. The various problems the characters encounter with detonation, radiation and the core materials are not made up technobabble. I can pretty much guarantee that you will never find another show that has characters talking about the neutron cross-capture section of fission by-products as accurately. 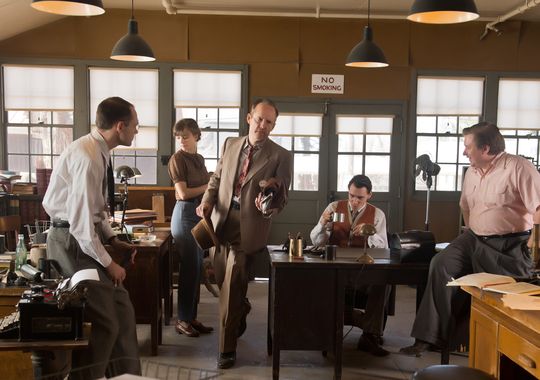 Real science, engaging characters and an awesome soundtrack (seriously Alex Somers and Jónsi, release the album soon) all collide in depicting one of the most fascinating events of the last century. We all know how the ‘Gadget’ turns out, but how will each of these characters respond to forever opening pandora’s box? The best new fully realized T.V historically-science-based drama proves that this T.V renaissance has only gotten hotter.

5 Best Episodes: “The Prisoner’s Dilemma” (Shocking end leads to many consequences down the road) “Last Reasoning of Kings” (Niels Bohr comes to the Hill to give his take on the project) “Acceptable Limits” (Charlie and Helen oversee potential calamity) “The New World” (Reactor physics a plenty) “Perestroika”(A fitting end that leaves enough open but also puts a cap on a great season)

Best Frank Stress Hallucination: Got to be as he and Paul are walking back from detonating their first prototype, a horrific look at WWI combat and the PTS effects on the soldiers.

Overall: A great setting for drama yields a great Freshman series, Sam Shaw of Masters of Sex proves that a dedication to the period and science behind the first Atomic bomb can give eye-opening engaging dramatic results.