Clint Eastwood’s latest war drama American Sniper is breaking box-office records in this early new year, nominated for several oscars including best picture and actor, and perhaps inevitably has started to stir controversy splitting audiences and critics alike with both with its handling of the Iraq war and its subject Navy Seal Chris Kyle, statistically the deadliest sniper in American Military history. Some labeling it pure war propaganda by glancing over the more dubious details about the war and the man himself, while others herald it as a masterful depiction of war and Post-Traumatic stress that many veterans suffer from. For myself, when I first saw the film I thought of it as kind of a tonal mess to be honest in terms of supporting character development, far too on-the-nose dialogue (“I’m only doing this to get your attention!”), appropriately paced scenes, too many war movie cliches (The enemy foil of the opposing Syrian sniper was created purely for the film, your typical shadowy reflection of our hero), gun-fight staging (repetitive to an extreme), and thus emotional resonance and investment. I considered it at best a decent middle-of-the-road Iraq war movie that intended to realistically depict the psychological torment that soldiers go through returning from combat, but suffered mightily from an uneven dramatic focus from the battlefield to home-life. Truthfully, I never would’ve expected this to garner this much attention from any crowd and generate as much discussion as it has, but I’ll get into why I think that it has a little later.

With all that out of the way, I only critique the film in terms of what it does, or lacks, on a cinematic level. Leaving politics far out of the discussion, and although I take some serious politically correct issues with some of the directorial choices made (For one the glaringly repetitive nature of Kyle’s kills during combat duty and the seemingly endless barrage of bad guys acting more like canon fodder than real-human soldiers, making the Iraq war look more like cut-scenes out of a call of duty video game) that is not really what truly bothered me about the film. Now, because of the highly opinionated subject matter that is the second gulf war people will read into the film what they may, it is what we do with every work of art that has ever been crafted by human hands. The thing to always keep in mind when watching divisive movies like this one is the difference between depiction and intent.

First things first, Eastwood as a filmmaker has to try to get his audience into the mind of his lead and this soldier by presenting the man’s admittedly rather skewed perspective; that he is in Iraq to kill “terrorists”, that there is a direct connection from 9/11 to Iraq, that he is over there protecting his family from dangerous immediate threats. This is not supposed to taken as any sort of fact or a overlaying political statement on the war itself, it is just this one soldier’s view on why he signed up and continued to re-enlist. In the times immediately post-9/11 it would’ve been easy to draw these unfounded conclusions in going to a recruitment office. Thus, is a depiction of Kyle’s world-view, from a filmmaker’s perspective, not a “rah-rah” Iraq war defense or any sort of propaganda supporting or against war. Eastwood himself has said if anything the movie has an Anti-war message, because of the gritty and harsh depiction of the home-lives of the second gulf-war vets. I do side with the director in this case, the scenes state-side carry much more tension than the Iraqi battle scenes on whether Kyle will eventually snap due to the horrors he has experienced fighting.

This confusion between a film’s depiction and intent has always been a problem within the medium. American Sniper is only the most recent example, last year Martin Scorsese’s Wolf of Wall Street was mocked for glorifying the decadent life-style of Jordan Belfort and his company cronies. If that were true then director Martin Scorsese must also be ‘glorifying’ domestic abuse, endangering children and being indicted by the FBI. Eastwood, like Scorsese, means only to depict their character’s lives, perspectives and outlooks truthfully, but at the same time certainly not being an endorsement of said viewpoints and life-styles. If anything, the intents of both filmmakers run counter to their lead character’s perspectives. Scorsese by showing the intense fall from of a life of excess and greed, and Eastwood by graphically showing the after effects of war and fighting far from home.

So, what is my problem with the film’s actual depiction of its hero? A lot of the negative backlash and positive press surrounding the film involve political pundits imparting their own views onto the movie, making the movie’s message into whatever their agenda entails. “How can we send blood-thirsty soldiers like Kyle over to the middle-east, we shouldn’t be over there in the first place!” “How dare you insult Chris Kyle, he was a loyal patriot, who saved his fellow soldiers through his valiant actions” etc. I could care less about the unending and honestly frivolous politics involved in this divisive subject, the two sides can bicker and bash until their they’re all blue in the face. What I do care about is the filmmaking involved, first and foremost, and the main problem I have here is that the Chris Kyle presented here a filmic straw man; the typical tough but soft-spoken military grunt that fights for his family but is conflicted with his blood-soaked duty (Which apparently the real Kyle was never conflicted with what he was tasked to do). It is the killer with a heart-of-gold trope that has been done so many times before in far better war movies.

Additionally, because of that overused and ordinary archetype every single audience member can impart their own feelings and perspectives onto the character with little to no problem. We’re with him at every step, never feeling as conflicted as the man looking into the scope. It is why the film has become so divisive, the overall blandness and non-committal nature of the main character allows people to graft our own personalities onto him. In the end the worst thing about American Sniper is not it being propaganda or dubiously politically manipulative, just being middle-of-road. Giving us a heroic straw character to root for, rather than a truly complicated and fully-realized man. Rendering a caricature to easily cheer for, instead of a real character to think about and understand. 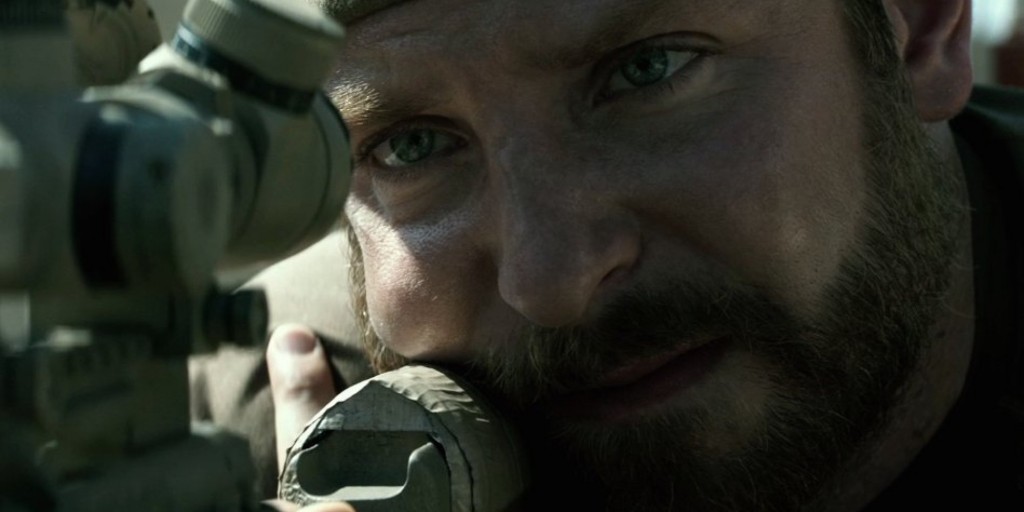