After being introduced to Edward Norton’s Monty and his childhood friend Jacob for the first 20min or so and watching him come to gripes with being sent away to prison for seven years of his adult life, Lee abruptly shifts the narrative to Pepper’s Francis X. Slaughtery, a Wall-Street financial trader with a fiery disposition and is callous in his dealings as he obsesses over unemployment numbers for the upcoming fiscal quarter. Shot in a typical Wall-Street hyper-kinetic fast paced editing style, our introduction to Slaughtery is one that sticks in the mind. The sight and sounds, the acting and energetic pacing all contribute to the dizzying atmosphere of a wall-street trading floor.

The scene is memorable for other reasons too as Director of Photography Rodrigo Preito makes a puzzling and interesting choice by shooting the scene with panes of glass in front of the actors in order to catch their translucent reflections depending on the blocking of performers and positioning of the camera itself. Acting as ghostly afterimages of the greedy and shady traders as they callously comment on the effects of the incoming unemployment numbers. 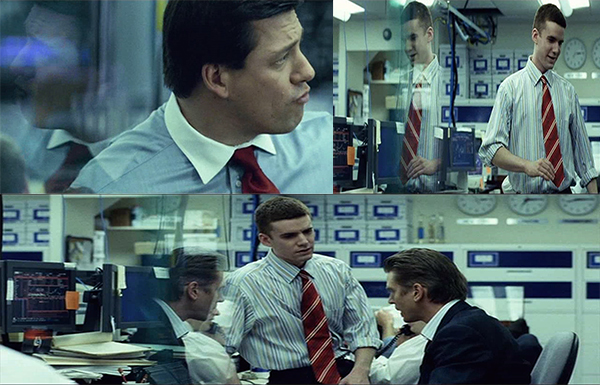 This of course can be read in many ways, the effect makes it look as though there is more motion blur to the characters movements exaggerating them adding to the kinetic atmosphere. A unique way to visualize what the filmmakers want the audience to be experiencing. However, there might be a more involved way to interpret the visual language, as always. Monty is going away for seven years, upon getting out even if he survives everything and everyone will have changed. His friends all realize this and throw a going away party for him more akin to a wake, but something happens when they are all brought together for a farewell party.

Monty’s diverse group of friends extend all the way from childhood and they each went their different paths in life; Jacob (Phillip Seymour Hoffman) a teacher at a prep school, Francis a wall-street mover and shaker, but each maintains strong ties with Monty. Strong enough to where he has the ability to seemingly remold their personalities when he is around them. Jacob is normally a sheltered timid academic, with his friend he his able to take risks and be impulsive for once. Especially in the case of Francis, who at his work place is a ruthless frantic money pusher but with his childhood friend he is compassionate, caring and thoughtful friend.

25th Hour may be a statement on the unbalanced harsh penalties for drug related punishments on the surface, but at its core it is about how we impact other people’s lives, and conversely the effect the people closest to us have on us. We all mean something and imprint different personas on the people we have in our lives, we are all different people in each of the eyes of the people around us. The scene that introduces him works to show this empirically and visually, with the translucent reflections of himself and his coworkers interlacing and overlapping symbolizing the “Imprinting” of Francis’ while at his workplace; how the environment, co-workers and type of job make him into a cold calculating number cruncher. Because away from that chaos of greed he is a whole other person; the concerned childhood friend of a small-time drug dealer.

Most might not be aware that the book the film is based contains no 9/11 subtext as it was written before the tragedy, Spike Lee and the Book’s author David Benioff changed the film adaption in the wake of attacks knowing they would face harsh criticism for hitting on such raw emotions not even a year afterwards. The combined anger and frustration felt by many seemingly all let loose in the infamous ‘Fuck You!’ speech that Monty gives near the beginning. What the filmmakers really meant to get at was that in spite of the horrors of that day and long time afterwards, New York prevailed and will continue forwards as always. However, this only adds to Monty’s plight as everyone around him, Francis, Jacob and his Girlfriend Naturelle (Rosario Dawson), will continue with their lives, his will be on hold for years. During that time all he’ll have are the memories of what he means to so many people and how he affected them in different ways. Maybe he’ll be able to go on and endure with the knowledge of that, the subtle but life altering power of one person’s friendship on another.

2 thoughts on “Scenery Theory: Visual Imprinting In The 25th Hour”