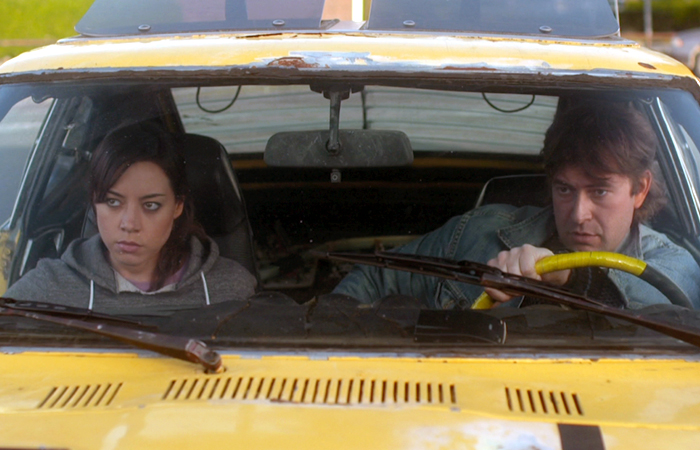 In ‘Safety Not Guaranteed’ Darius, Aubrey Plaza, is a typical twenty-something, discontent with her current situation including her unpaid internship at a seattle-based paper and her social skills (or lack of). She also harbors deep regret over a tragic event in her life. In comes an ad in the Washington classifieds for a “partner to time-travel, no joke” the paper decides to take this story on in a togue-in-cheek way. So she and two colleagues (Jake Johnson, and Karan Soni) take-off to get their story. She would like to believe this would be time-traveler (Mark Duplass) but has no reason to; however, as she bonds with the surprisingly kindred spirit she may find one.

Hear me out on this one: one of the primary pillars of religion or faith in general is in-fact doubt, without it there is no such thing as faith. Doubt is what strengthens our core beliefs, despite facing all logic and reason we will choose to ‘just believe’ at times. When these ‘leaps of faith’ are taken we are always thinking that we can beat the odds, we are greater than anything in front of us. As if saying ‘If we’re going to be damned, lets be damned for who we really are’ (kudos if you get the reference). These instances are few and far between, as are movies with as much heart as “Safety Not Guaranteed”.

Darius, played wonderfully to comic perfection by Aubrey Plaza, is one of those twenty-somethings who can’t fit in (know anyone like that?). Song careers have been made by singing about people like her, she is unsatisfied and full-of-angst. Hell, she even makes her residence in Kurt Cobain’s backyard, Seattle. At her internship at a local newspaper, a classified ad is brought up in a brainstorming session. “Wanted: Someone to go back in time with me. This is no joke. You’ll get paid after we get back. Must bring your own weapons. I have only done this once before.  Safety Not Guaranteed”

If nothing else, a curious little personal ad. While the rest of the staff only makes glib remarks, Jeff one co-worker, a revelatory Jake Johnson, there opts for further investigation into this seemingly joke of an article. More so for the paid vacation than for any journalistic venture. Darius tags along because, well, nothing else is going-on in her life, she also wants time away from it all. So they and another nerdy co-worker, another find in Karan Sozi, take off to the outlining suburbs of Seattle to find the wanna-be H.G Wells. Shortly they find the author of the classified, Kenneth, a heart-felt Mark Duplass, a lowly grocery stacker. It becomes readily apparent that he wil not respond to just anyone, so it falls, ironically enough, to Darius to try and connect with Kenneth. Their chemistry is defined quickly and strongly.

She doesn’t know what to make of it all. She wants to believe, she does. No matter how many signs point to doubting Kenneth. He’s paranoid, eccentric and reclusive. He’s a kindred spirit, inviting and caring. At every turn, she seemingly faces a fundamental choice we all make. As we are sculpted into skeptics, but we all want to believe in something. Whether it’s traveling to another time or companionship. While her co-workers explore the attempt of trying to recapture the spontaneity of the ‘old days’. It is Jeff’s own version of trying to answer a question about time, can one ever really go back to the way things were?

There is a great monologue towards the end of the film made by Kenneth about how experiencing love lost is in fact a kind of time-travel. You will never feel the same way about anyone or anything else again, even if/when you do move on. Experiences will always be different, feelings, the sights, and the sounds. Time moves forward, while you are stuck in a single instance. It is perhaps in this moment of emotional pouring and sharing that Darius decides she’s with Kenneth to the ends of the earth, of time and space itself. For as many know: bonding, companionship and yes, love, is a giant ‘leap of faith’ where safety certainly is not guaranteed.

8/10 (Hard to find but worth it, travel through time and space to find this one)