Making it in America: for the ‘if it bleeds; it leads’ crowd, AKA the current American media cycles. 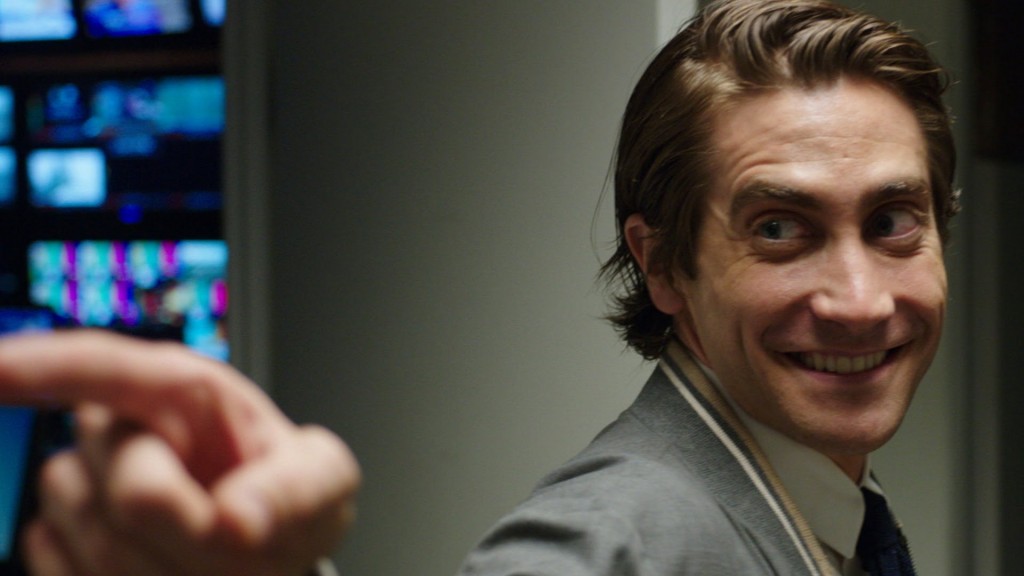 A satirical indictment of the media and its outlets has already had a go-around with Gone Girl earlier in the year, tackling the over-sensationalized aspects of nightly news, taking the problem from the receiving end of spin-doctored reporting. Here with first-time director Dan Gilroy’s probing and disturbingly funny Nightcrawler, the dissection is approached unblinkingly, unrelentingly and perversely from the news source itself. Jake Gyllenhaal proved he was a force just coming into his own with Prisoners a few years back, this past year he has propelled himself to rarefied air with his dual-role in Enemy and right here as the gaunt, talkative and psychotically determined (actually probably just Psychotic. period) Louis Bloom. A young California drifting through L.A, just trying to make ends meet, his only higher-education coming from a high-speed internet connection. Based on appearances, he is nothing seemingly imposing or dangerous, but there is a ruthless predator laying just underneath the surface. Though he is only looking for his slice of the American Dream, the big problems are the tools he uses and the lengths he’ll go to get that slice.

One day driving home after unsuccessfully trying to land a job in construction selling stolen supplies, he stumbles upon a traffic accident, like most bystanders passing by he slows down to witness the carnage unfold in front of his eyes. What catches his fancy is not the valiant attempt by the firemen and medics to safe lives, it is instead the sight of first-on-the-scene “Nightcrawlers”, people who videotape accidents, street crimes and sells the footage to the highest-bidding news channels. “If it bleeds; it leads” is the maxim that the people in this line of work live by (as dictated by the Local News Producers), prowling the streets looking for the next morning’s lead story. From then on Bloom is hooked into this life of sleaze, exploitation and grim determination. The streets and after-hours L.A world he begins to inhabit seem so alien, yet unfortunately are not all that distant. His appearance and vampiric lifestyle only heightens the other-worldly nature of his new lifestyle.

Some of us maybe aware that the local news and media cycles gain eyeballs and ratings wins by relaying and amplifying the fears of the public they are only supposed to keep well-informed with vetted reports. He cares only about the market value of the footage he gets not the means he has to go to get it, he is incensed by the thrill of the chase and invigorated by local network’s demand for shock value.

Gyllenhaal dropping some major weight is not the only thing that the actor reinvents about himself to become Lou Bloom. His usual way of talking, mannerisms and demeanor are completely remade to fit the maniac that is the young Nightcrawler, utterly engulfing himself in the role. Every bug-eyed stare, speech to his partner in crime Rick (a pitch perfect Riz Ahmed) and choice the character takes are all in service in to get him one step further to his ultimate goal. What that is specifically is left to interpretation, but you can assured that it is nothing good. The guy is unquestionably a product of our time; an opportunist with a Machiavellian drive and ambition to ‘make it’. Not unlike DiCaprio’s Jordan Belfort of last year’s Wolf of Wall Street, we are equal parts engaged and repulsed by Lou’s actions because of what he represents and says about us.

A never-better Rene Russo as Nina comes right into Bloom’s unblinking sights as he peddles his nightcrawling footage to willing Local networks. A producer of a perennial ratings loser, she needs an edge any where she can find it over her rivals even if it means making dubious deals with the likes of him. She has all the drive of Faye Dunaway’s Diana from Network nearly 40’s ago, but unfortunately times have become even worse for news than what was satirized back then. Sex may sell, but fear hits home. Showing images of street violence (especially an ethnic minority on caucasian violence), car crashes and petty crimes keeps the public worried about the next bogeyman loose on their streets and neighborhoods. Breaking News producers in Nina’s position know this information all too well and exploit this freely. 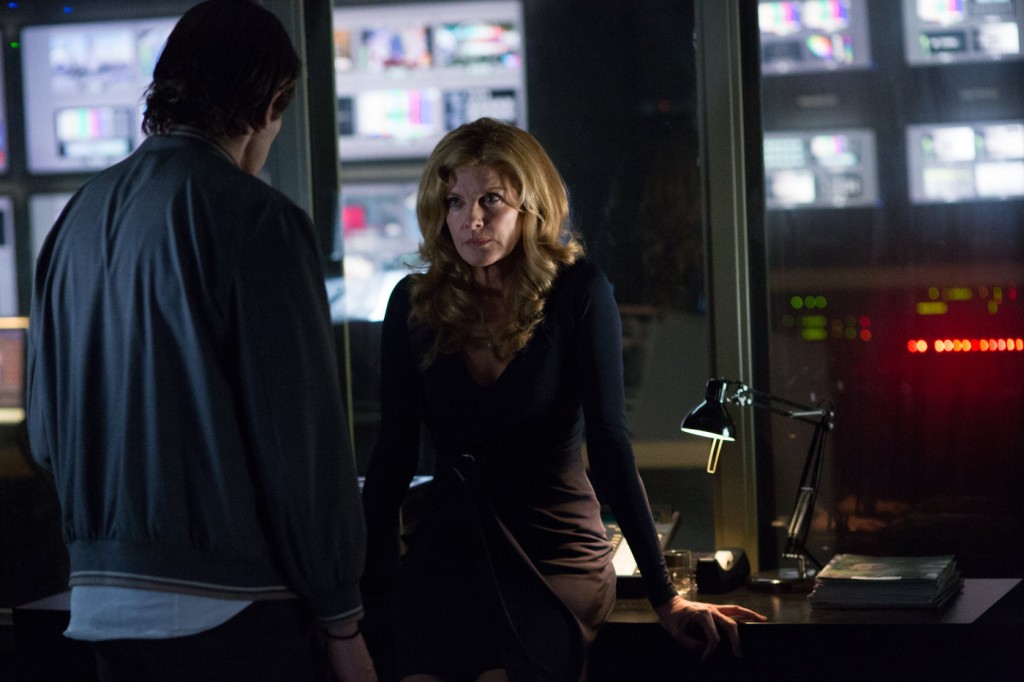 From the moment we get into the car with Gyllenhaal the film is off to the races. Hardly letting up for a single second in its running time. A twisted new-age hybrid of Wolf of Wall Street and Network, a match that works in large part due to the acting prowess brought to the screen by both Gyllenhaal and Russo. Not to venture too much into spoiler territory, but there is a scene of perverse seduction orchestrated by Bloom, ending with him basically extorting the woman into sleeping with him. The audience is thankfully spared the sicking sex scene that followed the conversation in part because Gilroy knows that Bloom isn’t doing this for sexual conquest or that he is really into this woman in question,as it is all about the sell for him; constantly making a pitch, no matter the situation. Everyone has a price in Bloom’s mind, and if someone like him can make and thrive in America in these times perhaps he’s not too far off. 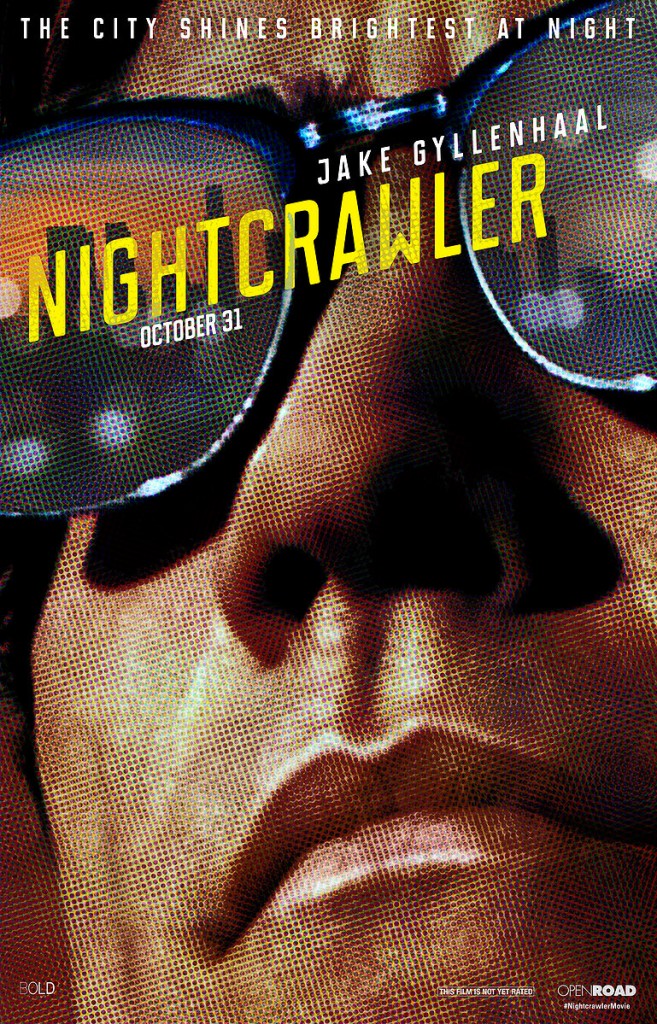 9.3/10 (A Fast-Paced, Kinetic And Darkly Humorous Character Study And Perspective Of American Ambition Without Any Integrity Or Boundaries, With Gyllenhaal Delivering Another Best Of The Year Performance Candidate)