Koyaanisqatsi: (In the Hopi Language) A life out of balance

“All those years, living the life of someone I didn’t even know.” 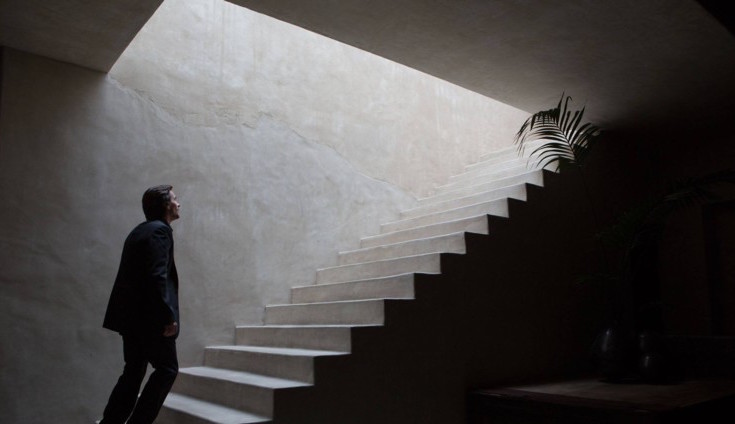 “This hill, though high, I covet to ascend;
The difficulty will not me offend.
For I perceive the way to life lies here.
Come, pluck up, heart; let’s neither faint nor fear.
Better, though difficult, the right way to go,
Than wrong, though easy, where the end is woe.”
― John Bunyan, The Pilgrim’s Progress

Well, what to begin, unpack, go on, say with this one? How about we start out with a modern-day pilgrim who is wandering in an unholy and decadent land, seeking only to find the ultimate truth where there is none to be found. Optimistic that just around the next corner there will be the answer to his life’s pursuit, but is constantly frustrated and disappointed by what he discovers. I supposed that is the best way, in words, to relate the story thread in the latest visual poem from auteur filmmaker Terrence Malick, Knight of Cups. Though that is completely insufficient to describing what the experience actually is. As with the rest of the auteur’s indelible work, this is an auditory and visual journey of emotion, thought and self-awareness.

Rick, played by Christian Bale, is our wayward soul in the director’s personal journey into consciousness, the sub-conscious and self-discovery. Rick is a well-to-do screenwriter living in Hollywood enjoying the spoils of his talent; getting into high-end parties, sleeping around with exotic women, mingling with celebrities and negotiating multi-million dollar deals. Despite all this success, he is adrift, detached and aimlessly looking for something more in his world. Though never stated out loud what that more exactly means, Malick’s M.O through and through, it’s the filmmaker’s own way of making this otherwise first-world-problems themed film universal.

In spite of this spiritual emptiness he feels, Rick isn’t always a dour and overwrought subject, he does enjoy on some visceral levels the lifestyle he has worked to. He’s just not taken with what all that, he knows there must be something more to it all. The people that weave in and out of his life all seem to know what they want out of their time on earth, going about their lives with a sort of purpose alien to himself. Especially in the case of his determined brother Barry, played by Wes Bentley, lives modestly in low-rent dwellings working on Philanthropic undertakings with the poor on the streets of LA. However, it is Rick’s life of glamor and privilege that gets all the attention and praise from their father Joesph, played by Brian Dennehy, causing family friction between Joesph and Barry.

Caught between the two is Rick internally having to weigh the merits of a life of altruism that would give him meaningful purpose vs. one of materialistic self-indulgent gains that has rewarded him in the eyes of his peers and father. A spiritual crisis rendered as only a filmmaker with as unique a style and vision can. In true Malick form, none of this is explained in dialogue it’s done in purely visual language that the auteur filmmaker has honed and mastered over his lengthy and resonating career. This time perhaps the work sharing more in common with Documentarian Godfry Reggio’s dialogue-free examination of modern society and man’s relationship to it thereof Koyaanisqatsi in taking the viewer on a journey or overall detachment and dispassionate within our modern society. Rick certainly is leading a life out-of-balance as the main theme and translated title of Reggio’s sweeping film. 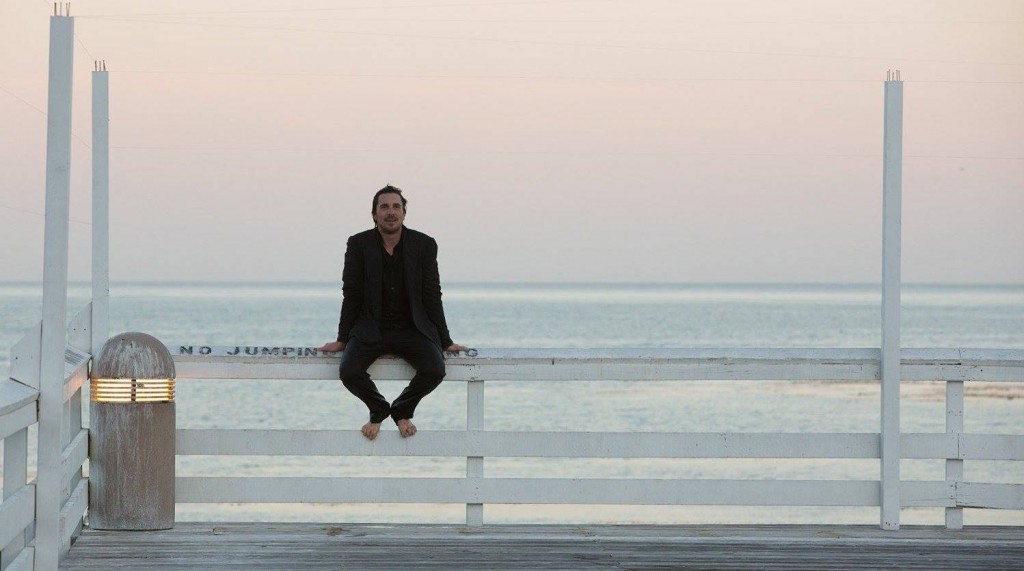 Meanwhile, it is actually Rick’s personal life that is firmly front and center in the narrative, namely his passionate relationships with six distinct women. Each providing their own insight into the man’s fractured psyche. From the first of these onscreen flings Della (Imogen Poots) “You don’t want love, you want a love experience”, to the penultimate relationship Elizabeth (Natalie Portman) “When I’m with you, I forget you”. Between the detached spirit and the passionate lover it is a whirlwind journey of finding his own identity with these women for him, seeking the same lofty (perhaps unattainable) emotional goals and repeating the same past mistakes again and again. Just as we all commit in our own lives.

The late great Mike Nichols when asked why film Who’s Afraid of Virginia Woolf? in Black and White answered that he wanted to make sure that his audience knew that what they were seeing wasn’t “real”. Film is a metaphor for life, not a stand in. Documentaries not withstanding, movies are inherently lies; Illusions carefully constructed to elicit an emotional reaction out of us. Those emotions we feel though are real, probably the most real things we have, thus films are lies but in service of truth. The director is revealing this truth on his own terms, as every other auteur before and after him has. So Malick’s own personal style of visual metaphors, contrasting imagery and purposeful lighting (needless to say all shot to perfection by the active legend Emmanuel Lubezki) is really not so different than the first visual trick in film history: Monochrome photography. It’s just he asks for a viewer’s open mind and patience.

While internal and external existentialism are corner stones of the filmmaker’s mantra, what is different this time around is just how much we stick to a singular person. A first-person perspective that is very much a first-conscience perspective in just how much Malick puts us into the thoughts and feelings of Rick. In doing so, the director lays out the struggles of a complicated closed-off persona, in what would otherwise be a vast unapproachable mystery. Understanding the internal crisis and perspective of not just Rick but perhaps even the filmmakers behind the camera as well. An invaluable gift of empathy and enlightenment that pilgrims of old would search far and wide for. And despite all of this I feel that I haven’t even started to really dig into this one, because just as usual there is so much more left to explore with this symphony of emotions from a true visionary maestro. 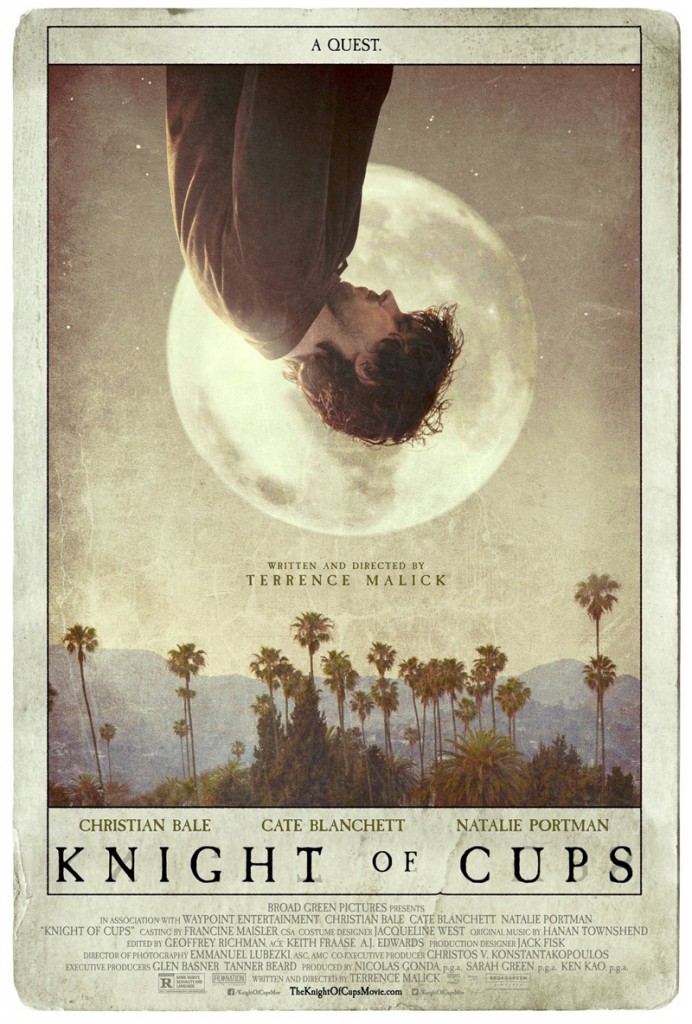 10/10 (A Sublime Journey Into The Subconscious, Spiritual Fulfillment And Epiphanies. A Uniquely Rendered Quest For What Lies Within Our Dreams And Deepest Desires, Revealing The Deeply Personal To Be Universal.)