“A thing is a thing, not what is said of the thing”

“There are no second acts in American lives” 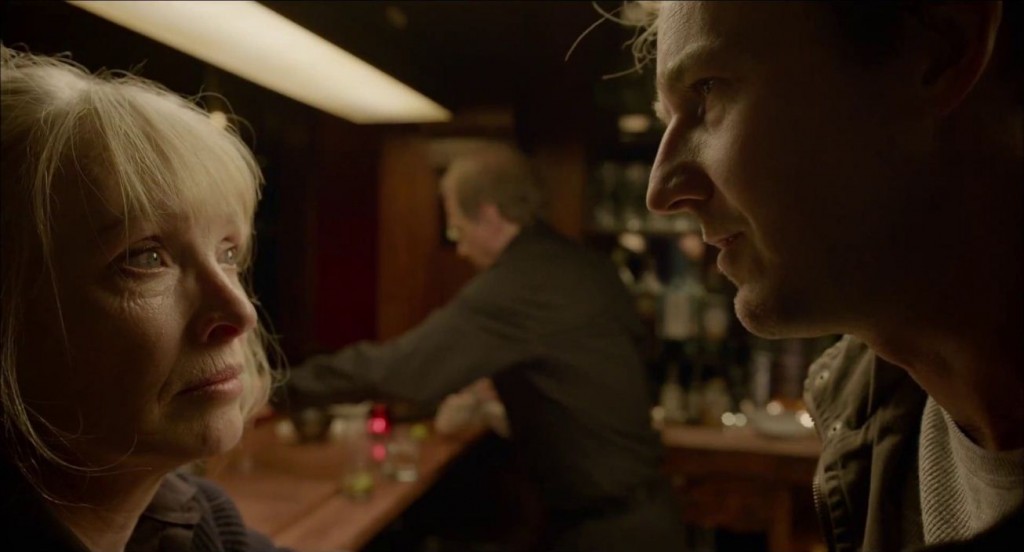 For those paying very close attention to the frequently used tags word cloud on the right-hand side of my site, one will notice the ones that are perhaps most typical to the kinds of films I tend to review: Character Study, Psychological Drama, Independent Film, Gritty, Dark. However, one phrase I keep using that might give you pause is “American Dream”. Old victorian-style home, white picket fence, 2.5 kids clamoring for attention and a dog running out to greet you is the common interpretation but how does that all fit in with what I admire in the movies I tend to review? Well that all above might be what the American Dream is for some, but for myself it simply means Reinvention. As in to get that home, family and income to sustain it usually one must transform themselves utterly to attain those goals. This idea that someone can just completely remake themselves to get what they want in life, to become something more than they ever could’ve believed now that is the dream. Not exclusively an American Dream to be sure, it’s just we Americans are the ones that tend to wax poetically about it the most in our art.

Proving that it is not just Americans that imagine this lofty dream comes divisive filmmaker Alejandro González Iñárritu (dropping the González to a “G” in this project), who has made an indelible mark on cinema with his blend of dark, gritty, depression-filled dramas since debuting with the sprawling, brutal and unflinching forcefulness of Amores Perros 14 years ago. In the time since his first feature he has seemingly tried again and again to recapture the grim ferocity of his first feature, with the sheer bleakness of 21 Grams, desperation of Babel, and pitifulness in Biutiful, all to varying degrees of success and failure. 21 Grams suffered from far too overreaching editing, Babel a far too drifting narrative focus, and Biutiful introduced too many subplots to conclude sufficiently. Nonetheless, all of them uniquely portraying the darkest and most unforgiving times of his protagonists. For my money it is in his latest work here with Birdman that he finally finds the same amount of feverous creative energy as with his first feature, a rejuvenation that is absolutely welcomed. Who would think the filmmaker would find his footing again with a comedy, no matter how dark said comedy is? 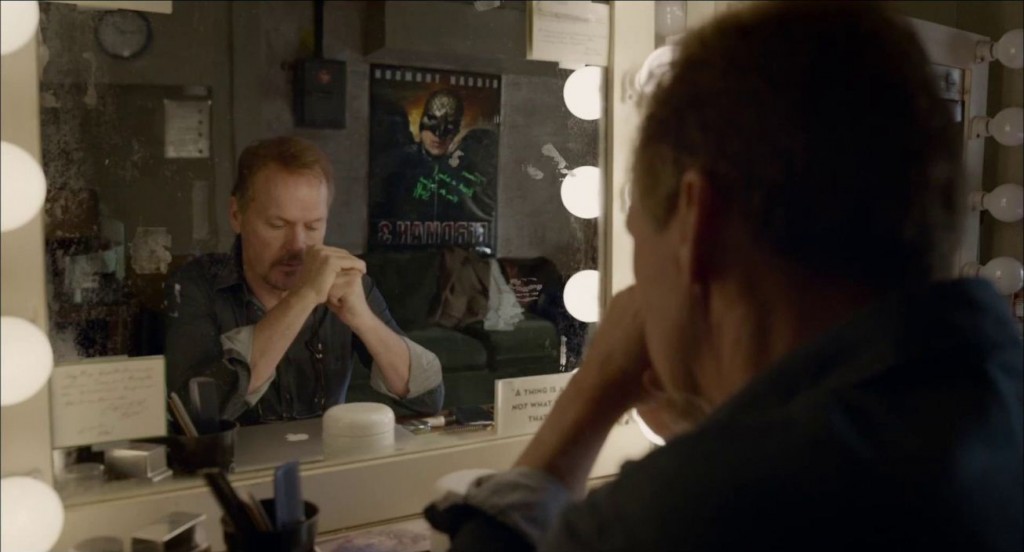 Washed-up former superhero actor Riggan Thomson (Michael Keaton) has his work cut out for him. Single-handily adapting and starring in a seminal work from obscure American writer Raymond Carver, “What we talk about when we talk about love”, to the stage in order to be finally taken “seriously” in his profession, whilst also clearly dealing with a mid-life crisis. The days of an easy paycheck from his glory days as the titular Birdman long past him, Thomson wants only to be recognized for the talent that he is, not as he was. We follow the man through the first rehearsals of what seems to a train-wreck production in progress. The bickering, the accidents on-set, work ethics, and the clash of egos are all derailing the preview performances to no end. Murphy’s law is having a field day on the most important ones in the man’s life. Only the actor himself seems to think that success and admiration are just around the corner, and all of the doubt he does have is forced back to him in his Birdman gruff voice, it all just has to lead to something doesn’t it?

It is clear that Keaton reaches rarefied air with his lead performance, one of the single best of this year, which is turning out to be quite the praise with the vast amount of stunning acting this past year. Equal parts hilarious, pitiful, desperate and driven, he fits well in Iñárritu’s unique style of protagonists. His search for professional redemption, personal identity and confidence to go on with it all is something to simply behold on-screen. He is not alone in portraying the absolute circus surrounding his play. Edward Norton as a last minute replacement actor Mike Shiner thinks he is the only ‘Artist’ in the whole production, trying to convey truth with every breath he takes. Naomi Watts is Lesley, Shiner’s lover and just trying to keep her head above water as a Broadway actress. Zach Galifianakis as a concerned friend to Thomson and production manager just trying to take things one day, one calamity at a time. Andrea Riseborough and Amy Ryan are the two loves being juggled in Thomson’s mid-life crisis.

It is, however, Emma Stone that nearly steals the show with her searing and emotional performance as Sam, the beleaguered actor’s daughter who never wastes an opportunity to emasculate her father with true venom. I spoke of emasculation with David Fincher and Gone Girl,  but it is never more hurtful and debilitating than it coming from your own flesh and blood. Being in a heightened state of emotion having just returned from drug rehab doesn’t help matters. Thus out of all the critics that assail Thomson as an artist she is the one that can get to him on a personal level as the man he is. 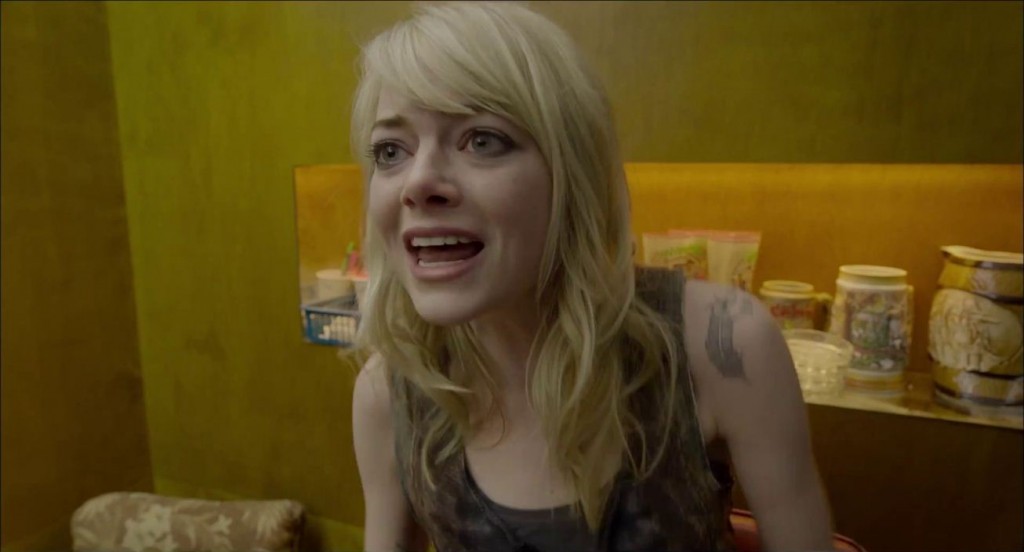 With all that out of the way, the real star of the show at the end of the day is cinematographer Emmanuel “Chivo” Lubezki, who now can pretty much be considered a living legend in the craft. Once again out doing himself from Gravity a year ago to lens a high-wire act, with shooting the whole affair to make it all look like one seamless take through a few days in Thomson’s life and his troubled stage production, with the aid of digital effects to be sure, but nonetheless it is a marvel to see. Another tag I use often is Filmmaking, as in the filmmakers that are doing things differently and taking serious risks with their work. Long takes and hitting marks within those takes are some of the hardest feats to pull off when shooting a film, but Iñárritu, Lubezki and crew make it happen scene after scene in this one.

Consider the comedic elements with all the insane interactions and mishaps on-set and it is a satire of the entertainment industry. Take away the comedy and satire and it is a desperate rendering of a life unraveling. Regardless of the tonal shifts the journey to re-discover identity and what that means to the world around us is constant, perfectly fitting into the Director’s oeuvre. A phrase on Thomson’s dresser mirror states “A thing is a thing, not what is said of the thing”, a constant reminder to himself that his life is not all that gets printed in the critic’s and tabloid columns; however, he is also trying to get to that elusive “Second Act” that F. Scott Fitzgerald gravely spoke of. If one is to take everything the narrative has to say to heart, it is because the first act is always a tough one to follow. 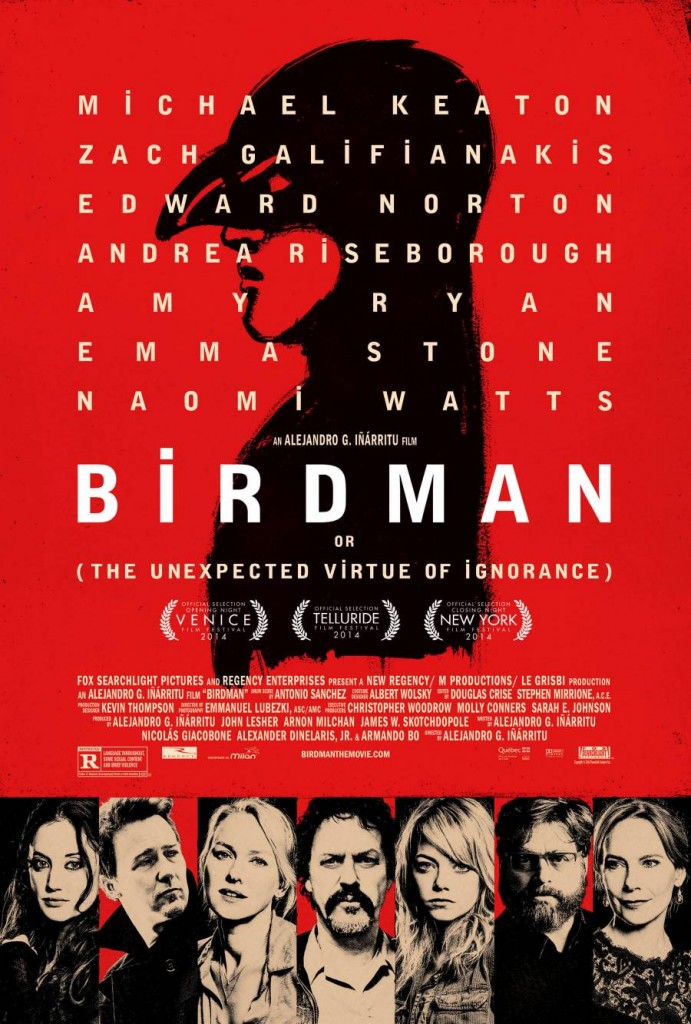 9.8/10 (A Career Rejuvenation For Iñárritu And A Career Best For Keaton, Conveying Equal Parts Hilarious And Poignant Character Study(s) Of A Life Out Of One’s Own Hands. A Statement On The Entertainment Industry, Identity And What We Mean To The World Outside Of Our Own Minds)

2 thoughts on “Birdman or (The Unexpected Virtue of Ignorance) Review”