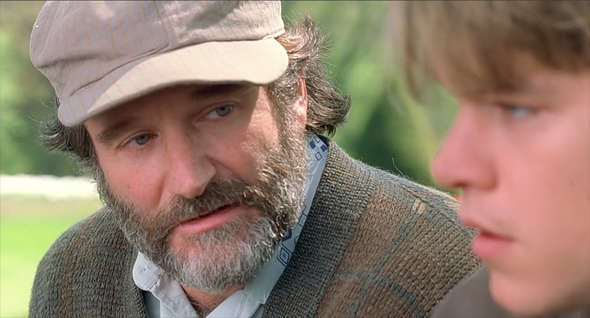 I don’t talk about many comedies on this site, I don’t refer to many comedic talents in my writings, it’s just the kind of movies and media that I end writing about are not flat out comedies, but I do have a sense of humor, regardless of how skewed it may be. I consider Airplane! and Ground Hog Day two of my favorite movies of all-time and a vast majority of people when asked will list comedies as their all-time favorites as well and it’s easy to see why; they make us all feel just a little better about the world around us. It mitigates our problems and helps us tune out an often chaotic reality.

Robin Williams, however, made a career using an entirely different kind of comedy; he turned the chaotic and non-sensical world into riotous laughter and thoughtful humor. His manic stream-of-conscious improv that only he patented always showed a keen eye for both observation and the absurd. As evidence by my favorite ‘comedy’ of all-time Dr. Strangelove, I’m drawn to humor that makes one think about what you are really laughing at. There is hardly any other comedian ever that had that rare ability. Taking away all that he had the infectious gift to make anyone laugh at anything he said, and that above all else is invaluable and inspiring.

He was able to translate this energy and stylings to film from Good Morning, Vietnam to Aladdin to Mrs. Doubtfire. The roles that made him a bona-vide star, but what made him more than just a normal funny man was the range he would show in different kinds of dramatic work. As the quintessential inspiring teacher in Dead Poets Society, the man dealing with unimaginable tragedy in The Fisher King, the creepy antagonist in Insomnia. Something struck me last night while in awe of his dedicated and nuanced work in the under-seen One Hour Photo; his uncanny ability to understand the alienated and isolated. To explore the emotional walls that close people off, and what we hide away shielded from the eyes of a world that just wouldn’t understand.

It is that remarkable and unique understanding that most people have seemingly taken hold of in the wake of the news of his untimely passing and the thing I would like to touch on here. See, I’m a very introverted person, probably more so than anyone else you know, I find more fun and satisfaction in reading a classic book or listening to jazz than out partying, drinking and/or partaking in other substances. This has nearly always been the case for me because in my childhood I grew up in a world of adults with not very many good friends my own age. In effect this made me an angry young man as I couldn’t socialize and learn to interact in the way most kids grow into, thus I felt anger at the kids around me and I was ridiculed time after time for the contempt I felt and exuded. It was a dangerous cycle leaving me very alone, closed-off, a smart-ass and viewing my peers as some asshole aliens from another world.

Seeing Good Will Hunting at a young age I loved every bit of it, in short Will Hunting was my kind of a guy, a smart-ass who was a math-savant who didn’t take shit from anyone, the scene that I just loved to death was the Harvard bar take-down scene between Will and the Harvard elitist prick. I wanted to become smart enough to just ripe apart anyone like that when I wanted to, or rather I thought I was already smart enough to do so. Years pass, aggravation and alienation have built up inside over those years, I was not in a good place is all I can really say and then one day I give the film a re-watch as it comes on T.V. Now, while most will cite the “It’s not your fault” scene as the scene they gravitate towards, for myself watching the movie the scene that left me downright speechless is the bench scene in which the first reconciliation between Matt Damon’s Will Hunting and Robin Williams’ Sean Maguire occurs.

Everything that I was going through at the time is incapsulated in that scene. The anger, the fears and above all the empathy that Maguire throws back at Will floored me. Though it may be a cliche, when I watched this scene I felt that Williams was addressing me directly. “You’re just a kid you don’t have the faintest clue what you’re talking about” “You don’t know loss” “When I look at you I don’t a smart confident man, I see a cocky scared shitless kid” “Noone can possibly understand the depths of you” All of those lines hit me now like a mile-long freight train. Though this wasn’t a single “turning point” in my life it finally made me realize that no one is going to be on your side if they don’t know you, and if you don’t allow them a way to do so. Sure there are still going to be some who will never accept what you are, and that’s just fine, you can’t control everything. I don’t get mad at my peers anymore (well most of them anyway), they have their pursuits and I have my own. I’m still introverted but I’m not completely hindered by it and I find similarly minded grounded people all the time now because I have learned to accept, not lash out.

It is perhaps by no coincidence he first became known to us on T.V as the alien Mork (Hilariously, it is rumored that Stanley Kubrick could not consider him for Jack Torrance because he was too disturbed by Williams off-beat performance), as he eventually showed us that he knew exactly what it is like for us to feel alien and strange in our own worlds.  In the end more than the tears of joy that the laughter he brought to me and countless others, that is the gift that will endure; Empathy. I understand that you’re a sheltered angry kid now, but you can change, you have the ability, no one understands you and probably never will but you can try by telling me your story.